Day 2 – “We must overcome poverty.” This is what our lecturer Mr. Lee Joon Ho said to start our lecture. I was surprised to hear this since I saw how progressive South Korea is today.  One thing I’ve noticed in our first two speakers is that they are very proud of South Korea’s ability to rise from the ashes, to have gone through poverty because of their civil war (and other events that took place in their history – invasions and colonization’s) and have survived. They have become one of the strong and emerging countries in Asia and they are right to feel such pride, to show themselves as an example to other countries and be able to say that do not use poverty as an excuse not to succeed. 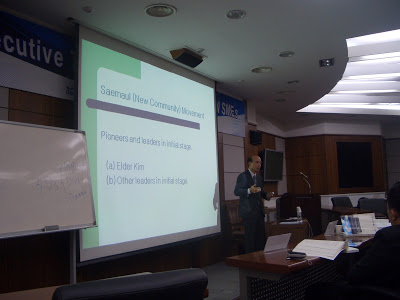 Mr. Lee starting his lecture.
The catalyst leading to the South Korea’s progress was the strong leadership of the late President Park in the 1950’s. He started the change by implementing agrarian reform as there was a huge disparity between those who had so much land and those who merely tilled the land. During his term, there was a strong emphasis on education and thus when the farmers started earning out of the sweat of their brow, they were able to send their children to universities. Reading and writing were also taught to the older generation.
Year by year, progress started to unfold and a movement called Saemaul was started. It was a kind of movement that was not in any way implemented as a law nor were there any buildings for their offices to signify it’s being official. This kind of movement was engrained in the hearts of every South Korean.
When they started the movement, the following were emphasized for everyone to practice.
1.  General thriftiness campaign – people were made aware to be even more thrift, to not waste resources and to make the most of what is there.
2. 4H Movement – the use of the Head, Hand, heart and Health.
As mentioned earlier, they gave so much attention to education (in fact their Won bills have the pictures and names of their Scholars). They were very hardworking and diligent and they were constantly reminded of their past. They worked as a team in building their nation once again (in fact, in the lecture about their culture, they don’t use the word “I” but always “We” and “Ours,”  always collective, always as a team.
Much emphasis was also given to their health as they believed the total balance of one’s health shall lead to more productivity and efficiency. Their food is always considered as medicine for the body and thus they rarely take fatty foods. I guess, this is why also I barely see any obese individual here.
3.      3.  Tree planting campaign – everybody, from the lowest to highest position, from young and old, helped in restoring their environment. Trees were planted in every vacant land. This is why, as we walk around or visit other places here, every landscape has trees growing in it.
4. Crusade against illiteracy – as mentioned earlier, education was key to their success. As stated by our professor, South Korea has a literacy rate of 97-98%. This is also why we have so many Korean nationals visiting our country to study as they are already learning the English language to further increase their competitiveness as a nation.
Through the Saemaul (New Community) Movement, a mental movement started. That they were to always think for their country and do what’s best for their country. They decided to export rather than import. We barely see any other brands of cars here but Hyundai and Kia. You barely see clothes that are non-Korean made in their stores.
They are very nationalistic and it makes me think and wish that we Filipinos could truly make a difference if we have the same thinking; To love our country first, to stop our colonial mentality. I remember growing up and studying Civics and Culture, we were taught that one of our traits as Filipinos was our “Colonial Mentality.” I don’t remember being told that this was a bad thing and we were not even convinced our teachers to love our country more rather than looking at branded  products and thinking that those made from outside our country is better (apologies to my previous teachers, this is a matter of opinion).
The Saemaul movement had 3 Spirits that further encouraged them to continue the movement and these were:
They had the can-do spirit and they were very strong willed. Nothing was impossible, no job was too little nor too big, no job was too easy or too difficult; they strove to hit the mark always. The movement also emphasized in building the rural areas. Their concept is noteworthy because by building the rural areas, giving the same progress and infrastructure as that of the major cities, the people did not have to go to the cities to get work and make the cities more crowded (this was back then). Thus most of the cities and provinces here in South Korea is progressive and everyone had a fair share of the growth and progress.
Mr. Lee ended his talk by inspiring us by saying “You too can be like Korea as your countries have your own natural resources and you too can grow.”
Our second lecture for the day was about Korean Culture and Society. We watched videos of their dances and our lecturer also talked about their history.

Our “official” lectures and learning ended early and thus Alan, Evan, Glo, Jong, Elvin and I decided to hit the town to check out their commercial area. I’m lucky to have camera-trigger-happy colleagues. We were taking pictures all the time!

Marker outside our campus 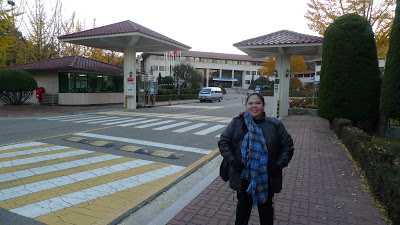 At the gates of our campus 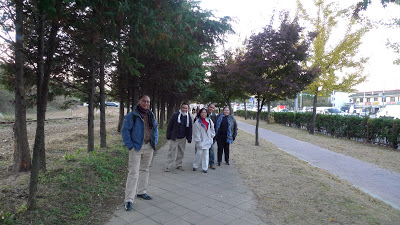 Walking toward Gondan train station
We first walked for about 10 minutes from our campus to the Gongdan train station and from there we took a train to Jungang (Commercial district). It’s amazing what sign language can do to help the communication gap. We couldn’t understand their ticketing touch screens as it was all in Korean characters and thus Evan asked one of their station guards and started pointing out our desired destination on the map. 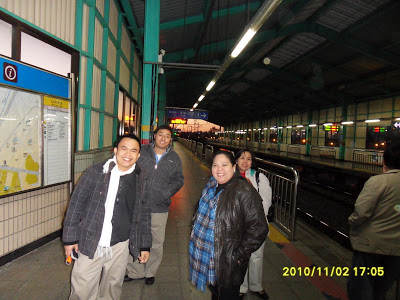 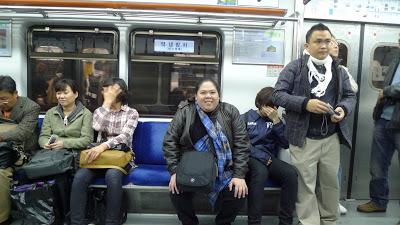 Of course, there were again the nuances of having to ask further directions as we waited for our train and this time Elvin started asking another local for directions.  The guy told us that he was going to the same place and thus told us to follow him. He eventually became Elvin’s new found friend – right Elvin? Hehe. 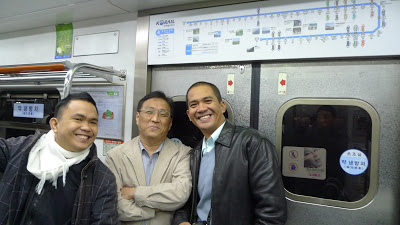 Jong and Elvin with Elvin’s new “friend”
As soon as we got to Jungang, we walked around and visited some shops. We stopped by a local grocery to buy some things we forgot to pack (such as my moisturizer) and then when we went out of the grocery store, 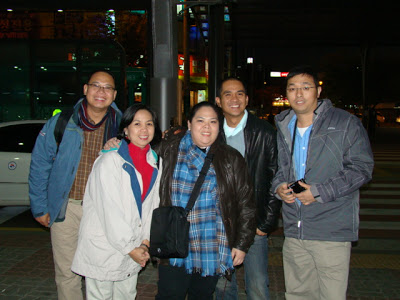 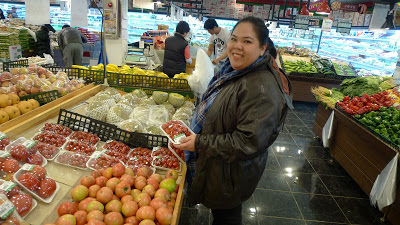 Evan chanced upon a food stall and we started eating (which is btw, one of the things we have been doing since we got here). Right after that, we walked for 20 minutes in the blistering cold to get to the Emart store which is one of their most popular department store chain. 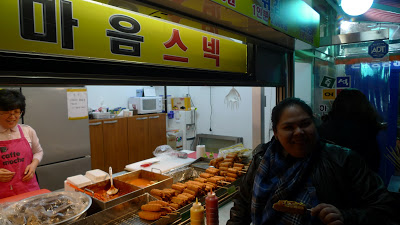 As we were already very tired from all our walking, we all took a taxi back to our campus and went to our dormitory pantry to eat our comfort food (McDonald burgers from emart :P) and of course drink a bit of Sujo (again.) 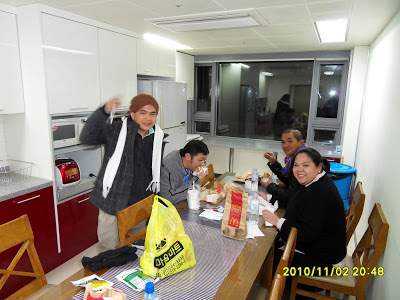 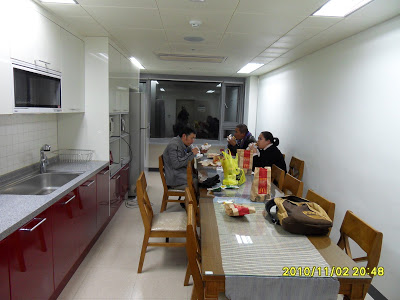 Again, another great day in Korea and once again looking forward to what’s in store for tomorrow. 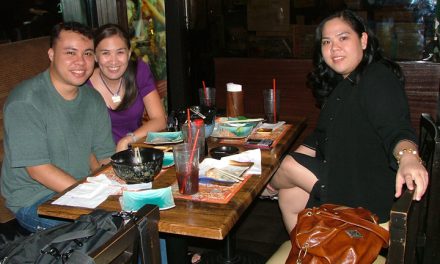 While Waiting For My Flight Back Home 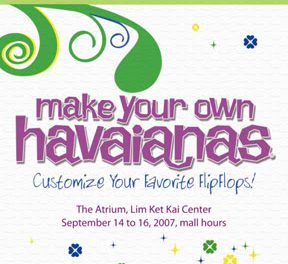